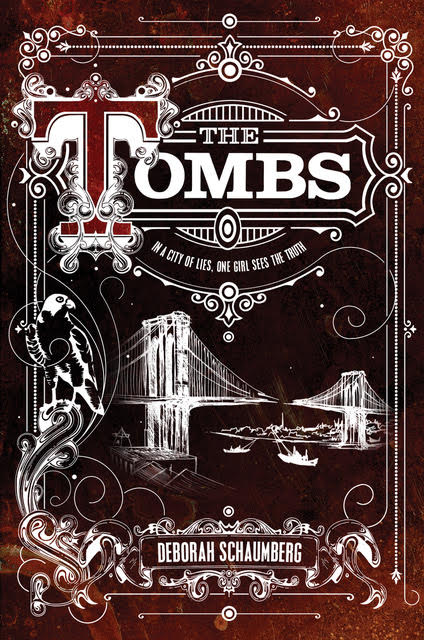 New York, 1882. A dark, forbidding city, and no place for a girl with unexplainable powers.

Sixteen-year-old Avery Kohl pines for the life she had before her mother was taken. She fears the mysterious men in crow masks who locked her mother in the Tombs asylum for being able to see what others couldn’t. Avery denies the signs in herself, focusing instead on her shifts at the ironworks factory and keeping her inventor father out of trouble. Other than secondhand tales of adventure from her best friend, Khan, an ex-slave, and caring for her falcon, Seraphine, Avery spends her days struggling to survive.

Like her mother’s, Avery’s powers refuse to be contained. When she causes a bizarre explosion at the factory, she has no choice but to run from her lies, straight into the darkest corners of the city. Avery must embrace her abilities and learn to wield their power—or join her mother in the cavernous horrors of the Tombs. And the Tombs has secrets of its own: strange experiments are being performed on ‘patients’…and no one knows why.

The Tombs takes readers on a breathless trip across a teeming turn-of-the-century New York, and asks the question: Where can you hide in a city that wants you buried?

PRAISE FOR THE TOMBS

“an intriguing debut set against an alluring, well-constructed backdrop. Avery’s steampunk, fin de siècle New York is full of possibilities, and Schaumberg follows them to their deepest, most frightening depths.” —Booklist

“New York City in an alternate, steampunk-inspired 1882—filled with airships, clockwork creatures, and an extraordinary blend of science and magic…villains who are successfully spine-chilling and provocative…With an aesthetic similar to Westerfeld’s Leviathan series, the book does a lot with the actual history—however uncomfortable—and convincingly adds magical and technological possibilities, making for a gripping read.” —BCCB

“Likable characters and much action and adventure, including the use of more than a touch of magic, lead to a cliffhanger ending that will have teens hoping for a second installment.” —Voice of Youth Advocates Reviews

“Schaumberg has crafted a rich and gritty 1880s New York while infusing the historical with enough of the speculative to land it just this side of steampunk.” —Kirkus Reviews